Nickelodeon wanted to publish a cookbook aimed at 8- to 12-year-olds based on this very popular character. The tone of the book had to reflect the wackiness of this underwater world and all of its characters. Waterbury was hired by the publisher—who had created a rough outline of the book—to further focus the concept, develop 50 recipes, work with a Nickelodeon writer to create a running narrative that told the story of a cooking contest in Bikini Bottom, and to write front matter including an introductory note to parents, Cooking 101, measuring, a culinary glossary, and kitchen and food safety. 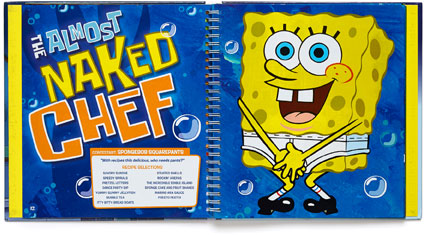 A study of the graphics used in the show informed our design for the book. We worked online in the Nickelodeon digital content library to look for and download vector and raster images of backgrounds, character illustrations, and support graphics. We then combined these images into custom designs on each spread. Different typographical themes and color palettes were used in each chapter. And those familiar with the show will appreciate the storyline that was designed to flow through the book. 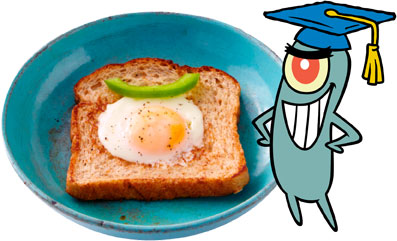 Waterbury was hired to develop and test 50 recipes for the book that would appeal to kids but that would also be relatively healthy (lots of fruits and vegetables and whole grains) without a lot of sugar or processed foods. There were three additional stipulations: No seafood (you don’t want to eat your friends!), no Krabby Patties (the recipe is a well-guarded secret), and almost completely vegetarian (the creator of SpongeBob is a vegetarian). The book was organized in chapters by character and the recipes reflected the quirks of each one, as well as the nautical theme. Clever titles include Plankton’s Eggs Evil Side Up (pictured right), SpongeBob’s Itty Bitty Bread Boats, and—the last recipe in the book—Krabby Patty Cakes, a cupcake made to look like a crab cake sandwich (pictured above).